Leave Gina a review on Google

Thanks for seeing Oliver again, we always come away from your appointments feeling so positive!
Alison (A parent)
April 2013

Finley and Gina’s Adventures; a story by Finley, aged 8 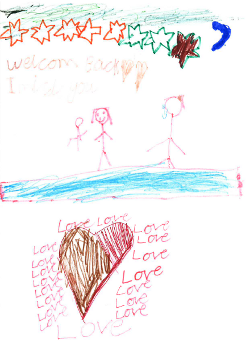 One day Finley and Gina were really bored. Fin loved doing his exercises but Gina thought Finley should go on a magical adventure.

Gina wanted Finley to know all about his leg muscles and how they work. She got her magic dust out and sprinkled it on herself and Finley. They counted to three and ‘BOOM’ they shrank down so small, even smaller than a flea, they held hands, and then they opened their eyes... they found themselves inside a leg looking right at a calf muscle!!!

Finley found out all about ‘tone’ and ‘range’ and how and why his legs work like they do. They both had a fantastical time, it was their little secret.

Finley’s mum was very surprised when Finley could explain all about leg muscles; Gina and Finley gave each other a knowing look....

Thank you again for all your help and we will certainly call on you again if the need arises.
Jo (A parent)
Sept 2012

You can also read older testimonials

This web page is written in PHP and validates as strict HTML4.01
This page was written by Robin Hall and is ©2013 Gina Farmer